David has been involved in entrepreneurial ventures and investments from a young age. Before studying for a degree in Corporate Finance and Entrepreneurship at the University of Groningen, he set up a car washing service that was closed down by his parents when one of his friends working on the venture crashed a customer’s car. Since then, he has become involved in many successful ventures including Light as a Service, which has revolutionised the traditional lighting industry.

Along the way, David also built a successful career over four years as an investment banker at Kempen & Co. He decided to move to Seedrs in 2016, when looking for a new and exciting industry to work in and saw crowdfunding as his next business opportunity.

He chose to work with Seedrs in particular because he believed its message of ‘equity crowdfunding done properly’ would resonate in the Benelux region, which has seen some early play from crowdfunding platforms but none from such a well-established and credible company as Seedrs.

His role at Seedrs will be to tap into the healthy ‘start-up ecosystem’ in the Benelux region, making sure that new companies and ‘their crowd’ know how to co-operate and build successful ventures as a result. His longer term goal is to be involved in building Benelux and Europe as whole into successful centres for equity crowdfunding and to democratise the non-listed equity market.

David believes that his biggest challenge at Seedrs will be challenging scepticism about the risks of crowdfunding in the Benelux area. However he believes this will be overcome by passion amongst investors in the region for ‘being part of something they love’ and by the fact that Seedrs, with its track record and robust platform, will help to build confidence in the equity crowdfunding concept.

Validation by the crowd of a business model, combined with high returns, will make crowdfunding into an asset class that is interesting for pension funds and other institutions, which have long term investments and see traditional partners, including venture capital firms, charge high management fees. Via crowdfunding platforms this cost structure can come down and a well-diversified portfolio is relatively easy to build. 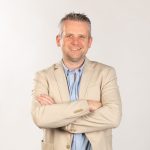